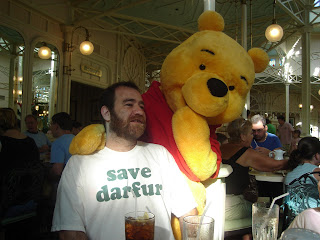 The costumed performers at DisneyWorld are Teamsters. I used to work in the Teamsters Communications office.

I'd been told by a bunch of old colleagues that the performers would give Monkeyboy extra attention if I wore my Teamsters paraphernalia (T-shirts, pins, etc.)

As, on this day, I was wearing my Save Darfur t-shirt, I needed to get the point across to Pooh another way.

In this picture, Pooh's just heard me whisper "Whatever you do, VOTE HOFFA."

I LOVE your shirt. I want a Save Darfur t-shirt.
You aren't round like you said you were.....
Looking Good DIDC!!!

Here's a link for buying stuff from the Save Darfur Coalition:

As to my shape, thanks. An XL t-shirt is my favorite form of camouflage.