A New Approach to Conservation 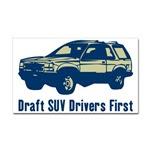 From the fine folks at cafepress.
Posted by David in DC at 9:38 AM

the person who designed that never had to carpool :-)

....or the person never had the experience of driving a tiny, flimsy, unsafe-but-fuel-efficient CAFE-compliant car in roads crowded with semi-trucks

Sure, we can draft them. But after we draft the cell-phone-drivers, pizza delivering maniacs, winter ice-road tailgaters, and bluehairs that can't see over the steering wheel.

I agree 100% although I would wear one of those shirts..

Just so long as they don't say that about people who drive Subaru station wagons.

well, ah. Huh.
I don't want to be drafted! And everyone up in my little podunkian town drives some form of SUV or truck. We have the need for all wheel drive in the snow!

Hey - Mie - you can get AWD in lots of regular cars!!! My Subaru kicked ASS and passed MANY Jeeps, etc in the snow last year.
I like the idea, David. How many people in an SUV do you even SEE with more than one person in them, at any given time?! Also, some idiot out there has convinced people that the things are safer on the road than regular cars. What?! That doesn't even make sense!!!!
Obviously I hate SUVs. :)