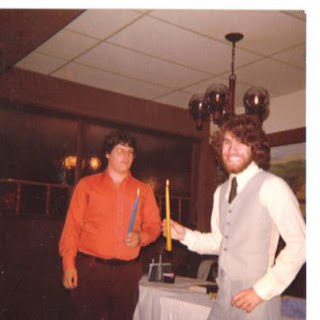 I posted this picture of a friend on Facebook yesterday. It was at an event in our youth group days. You can see he’s quite literally passing a torch (or at least some fire) to me at an Installation Dinner near the end of his senior year. It was near the end of my junior year.


We’d wound up President and Vice President of the smaller of two B'nai B'rith Youth Organization chapters in town after an unpleasant bit of teen-age high drama. It had left us on the outs with several guys we’d been friends with in the larger chapter. A very wise regional director suggested it might be a good thing, for all of us, if Slim and I moved to the smaller chapter, which was close to folding, and try to resuscitate it. I jumped at the challenge and the opportunity to put some distance between me and some guys I was pissed at.

Slim bought into the challenge part but, looking back, I realize the distance-putting wasn’t so important to him.

Anyway, this installation dinner picture was him lighting a candle, then lighting my candle with it, signifying that he was graduating and I was becoming President.. A few days later, he told me he’d scored tickets to a Bob Dylan concert by sleeping out at the War Memorial arena the night before. He offered me to sell me a ticket. I was bummed because I’d be out of town on the night of the concert.

I asked if he’d gone downtown overnight alone. It was the sort of exploit he’d have that would have scared the dickens out of me. He always came back from that sort of thing with new friends. But this time, I found, he’d slept out with the two guys I was angriest at from our first chapter. I’d thought (or assumed maybe) that he was still just as angry. He wasn’t.

“C’mon David,” he’d said to me. “They’re ok guys.” He said a little bit more about it not being worth holding a grudge and when he saw it was falling on deaf ears he stopped trying to convince a pebble to fly.

I knew he was taking the better, not to mention nicer, course. But I couldn’t find it in me to do the same.

He did the right thing.

Just a short time later, he was gone. He died one day short of his high school graduation --- in a stupid, random accident. He’s always lived on in the hearts of those of us who loved him. Including the two guys I wouldn’t make up with.

Yup, he did the right thing. And taught me an important early lesson about both life and mortality.

Ever since, I mostly try not to hold grudges.
Posted by David in DC at 3:45 PM 2 comments: Links to this post