From sundown last night until sundown tonight , it was the Jewish holiday of Purim. It's a holiday that revolves around the biblical Book of Esther.

It's also a festive holiday, with special pastry called hamentaschen and a tradition of telling the story of Esther in a joking, parody format.

Our Purim speil (parody play) last night was a hilarious take-off on the Star Wars oeuvre.

But none of that is the reason I'm putting up this post. I'm doing that because Purim also usually involves masquerade. Most kids, and many adults, dress as characters in the story of Esther. Others where superhero, lady bug, ninja or other such fanciful garb.

I generally shave off half my beard and moustache. (I generally do it for Halloween, too.)

RFB got a picture of it this year. And so, without further ado: 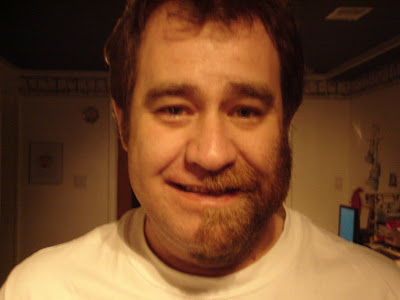 OK, now I gotta go shave. My employer is pretty cool about letting me show up to work on Halloween looking like this, but if I show up looking like this for no good reason tomorrow, it could, quite reasonably, test their patience.
Posted by David in DC at 8:13 PM

Cover up one side and look. Then cover up the other. The beardless side looks very happy, and the bearded side has kind of a worried look!

I tried the dmarks cover up test. Think its because the bearded side covers up, the up turn of didc's smile where the beardless side shows it all. Interesting observation and interesting post.

Do your co-workers pass by you and not notice at first or say "something is different" but cant put their finger on it?

Haha...Too cool. You could've gone to work with half a beard and pretend that nothing is wrong. Or tell them you got kicked on the side of the head like Kramer from "Seinfeld" and randomly shout out stuff like "Yo Yo Ma!"