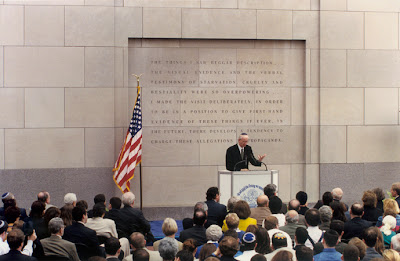 The things I saw beggar description ... The visual evidence and the verbal testimony of starvation, cruelty and bestiality were ... overpowering ... I made the visit deliberately in order to be in a position to give first-hand evidence of these things if ever, in the future, there develops a tendency to charge these allegations merely to 'propaganda.'

It's inscribed in the wall at Eisenhower Plaza, at the United States Holocaust Memorial Museum, shown above.

As I've written before, President Bush has described the events in Darfur as genocide.
And still the world dithers.
I am old enough to know people who are tattooed from the concentration camps. My friend Michel was saved from the ovens by Operation Kindertransport, a secret project in which children were sent --- without their parents --- out of Austria, Germany, Poland, and Czechoslovakia to Great Britain. Eventually many came to live in the United States of America or Canada.
Never Again, Goddammit
It's shameful enough that, after he left office, President Clinton had to visit Rwanda to make an apology for U.S. inaction during the genocide that occurred there on his watch.
Does anyone have the remotest notion that Shrub would have the grace or humility to do that?
But to hell with apologies. The time to act is now.
A couple of friends have wondered why I've been beating this particular drum so heavily. I honestly believe that Jews have a special responsibility to make sure those cries of Never Again we all grew up on actually mean something.
Interestingly, none of the friends who've questioned my zeal for this cause are Armenian.
Like Jews, Armenians know --- viscerally --- that unless good people act, unspeakable evil can and does flourish.
Never Again, Goddammit.
Posted by David in DC at 4:29 PM