Bayard Rustin and the 2009 March on Washington

My friend Joyce came down from NYC on a bus sponsored by Audra McDonald for the big civil rights march yesterday. We met up amidst 300,000 of our closest friends and had a wonderful time.

Bayard Rustin is one of my personal heroes. He organized the 1963 March on Washington where Dr. King made his "I Have a Dream" speech. He was the principal aide to labor and civil rights pioneer A. Phillip Randolph. He was 20th-century America's foremost strategist, practitioner and teacher of non-violent civil disobedience. That's not my assessment. It was Gandhi's.

It's why Gandhi invited Rustin to study in India after WWII.

Anyway, if you've never heard of Rustin, you're missing a key piece of the history of the 20th century. John D'Emilio's biography, Lost Prophet: The Life and Times of Bayard Rustin, is well worth giving a read.

Part of why you don't know about Rustin is that he was gay. So he lived in the shadows of peace movements, civil rights campaigns and coordinated acts of non-violent resistance that could not have happened without him.

I was tickled appropriately pink to hear his name and spirit invoked often and with due reverence yesterday.


One thing I love to do at political protests is read the signs. The two best I saw were:

A) A body-length placard worn by a thoroughly suburban looking teenager which read "I CAN'T BELIEVE WE STILL HAVE TO PROTEST ABOUT THIS SHIT", and

B) The one I've plucked from twitpics, below: 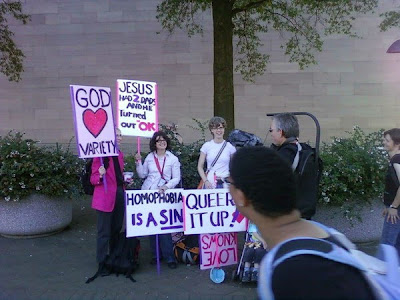 Joyce and I saw these folks on the Capitol grounds.

It's irreverent, perhaps even to the point of blasphemy for some, but I have no dog in that fight.

JESUS HAD 2 DADS
AND HE
Turned
OUT OK

Effing brilliant. You go, church ladies!
Posted by David in DC at 5:36 PM