My friend Jeremy says this today:

"Nice to see Slammin’ Sammy Sosa hit his 600th career home run on Wednesday. That, of course, makes him the career home runs leader among all active players who are not being investigated for steroid use...."

Here's a link to the piece where he says it.

Respectfully, I beg to differ:

I found the image above on this "Cubs Suck" blog. 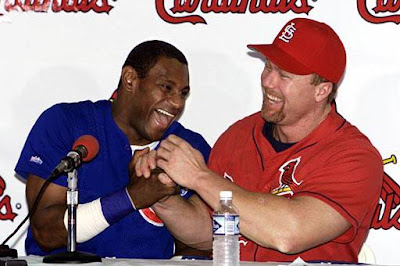 I'm sure he was "juicing". His anemic stats the year he got off the juice and played for the Orioles are pretty good evidence, if the pics don't do it for you.

As to whether he is currently "...not being investigated for steroid use...", the investigating committee headed by former Senator George Mitchell is bein' kinda quiet about who, exactly, it is investigating (except for the messy negotiations with Jason Giambi and his lawyer(s)).

No denigration of Jeremy or his blog is intended here. Reasonable people can differ. The mark of adulthood, as I have often observed here before, is the ability to disagree without being disagreeable. I hope I've succeeded.
Posted by David in DC at 2:02 PM

Slammin', corkin', juicin', roidin' Sammy.....that's quite a feat for a guy who shrunk to almost nothing two years ago.

In the radio interview I noticed his English has greatly improved since the congressional hearings, he must have studied a lot in his time out of the limelight.

I could go on for days on this subject, great post from one baseball fan to another.

Uh-oh. I've become David's whipping boy. This can't be good. Oh, well. Maybe he's right. And maybe my admiration for Sosa (the corked bat incident notwithstanding) has blinded me to what should be obvious. But I just don't see the telltale signs in Sosa as much as I do in the more obviously exaggerated physiques of guys like McGwire, Bonds, Giambi (a few years ago) and Canseco. But make no mistake: If it turns out Sosa has been a juicer, I'll take the same position regarding him as I have with the cheaters mentioned above -- that their stats should be stricken from the record books, they should be banned from baseball for life, and they should never be enshrined in the Hall of Fame. I guess time will tell. (And by the way, David, thanks for giving my blog a plug.)

Ah, baseball. A once-great professional sport with a 150-year tradition that was, in less than a decade, reduced to a farce by its biggest stars.

The upshot of the steroids frenzy is that the cornerstone of baseball -- its historical records -- have been emptied of meaning. Sammy, Mark, and Barry might just as well have hit all those home runs in the Williston Park little league, for all they mean.

These guys destroyed the sport they loved. They can keep the millions they bilked from fans, but they will never be able to wash out the stank.

When money is involved, people are going to cheat. Fact of life.

Did kids in the old days have those fights?

I can't help but love the Cubs, having grown up next door to fanatic Cubs fans. Fergahdssake, the two neighbor girls my age had a photo of Ryne Sandberg on their bedroom wall, for purposes of general smooching. How else can I be?

So, for nostalgia's sake, and not for any other reason such as, um, reason or anything, I must say: I disagree! (Jerk...)

e-e: Thanks. Sorry my Nats couldn't manage to beat the Tigers even once. Wait 'til next year.

Jeremy: No offense intended. None taken, I trust. Someday we should tell all these folks about your date with my mom. :)

McGwire gets points with me for the way he deflected some of his spotlight onto Roger Maris' legacy and family, and for the money he's put toward working with exploited kids. But all of the juicers, McGwire included have much to be ashamed of.

ANON1: Doesn't mean we shouldn't heap scorn on the cheaters when we catch 'em.

Churl: I'm sure they argued about who threw a spitter or who played too hung-over to be worth a damn.

The biggest problem here is that it was all so obvious, and the owners and commisioner turned a blind eye.

We also should tell them about my date with your wife! (BHS Homecoming, 1978. Ask her if she remembers where we went for dinner before the dance.)

Jeremy,
Was it Scotch and Sirloin? I definitely remember having a great time and that you were a perfect gentleman.

You have an amazing memory, Mrs. David. (Not sure if I'm supposed to use your real name here.) It was, indeed, the Scotch and Sirloin. And thank you for recalling me as a perfect gentelman. I think my inappropriate behavior toward women didn't begin until later that school year.