One of the cool things about a blog is that occasionally someone finds a post from some time ago, like "Prayer for Darfur" and posts a new thought on it.

Sometimes, not so much:

I'M WITH JESUS said...
WHY ARE NEOCOMMIES AND JEWS TRYING TO PRECIPITATE ARMAGEDDON? THEY'LL JUST BE IN HELL THAT MUCH SOONER: http://deanberryministries.org
March 10, 2007 3:59:00 AM EST

In other matters, the trip to Atlantic City was great. The GW Colonials won the A-10 tournament and are headed for March Madness.

Hail to the Buff and the Blue!

(Don't ask. At least our mascot isn't a Billiken.) 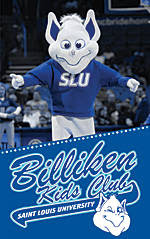 Re-entry has been a bitch but I'll post embarrassing stories when I get a chance.
Posted by David in DC at 7:03 PM

Welcome back...missed your posts. Looking forward to the embarrassing moments. Dont worry we will not laugh at you, just with you.

Regarding I'm With Jesus comment. I truly do not understand why some people feel it necessary to go out of their way to make rude, negative, offensive, hurtful replies to posts. There are ways to communicate your feelings without leading with a right hook. Anyhooooooo...

Hang in there, hope re-entry gets hit in the hiney on the way out the door and your days are filled with quietly quacking ducks.

I can't wait for Armageddon. the sooner we get away from people like I'm With Jesus and start spending all our time with NeoCommies and Jews, the better. It will be so much more.

Fun. IT will be so much more fun.

Moonbeam: Thanks for the nice welcome back. My old friend Yarek likes to say "We're not laughing AT you, we're just laughing NEAR you".

I'm With Jesus doesn't really bug me, but his comment was so archetypically over the top that I wanted to share it for the giggles.

Buff is a color, I'm told, not a state of cladness. It's sorta between tan and beige, or between beige and ecru. You got a dirty mind. I like that.

Churlita: Armageddon ready for that.

dmarks: Thanks for the link. cool story.