I Heart The Onion


Breaking News: All Online Data Lost After Internet Crash
Posted by David in DC at 5:35 PM 5 comments: Links to this post

I've become jaded about these sorts of announcements, but this one looks a little different. Let's hope, and if so inclined pray, that this marks a positive turning point.
Posted by David in DC at 4:45 PM 5 comments: Links to this post

Last Friday, I alluded to a meeting I would have this week that could lead to a project where I could get back to flexing my poverty lawyer skills.

(Aside: In my six years as a Legal Aid lawyer, I kept telling my mom and, when she burst upon the scene, RFB, that there was a difference between a poverty lawyer and an impoverished lawyer, but I was never really able to elucidate that difference.)

Anywho, the first of what may turn out to be several meetings was yesterday, and I think I made a favorable impression.

Damn this is gonna be nerve-wracking until it's resolved. Please keep your fingers crossed for me. At least when you're not typing or carrying any boiling liquids.

Here are the rules, if you'd like for me to dream up 5 different questions for you.

1. Leave me a comment saying "Interview Me". (Perfect strangers are welcome, as well.)
2. I will respond by emailing you five questions. I get to pick the questions.
3. You will update your blog with a post containing your answers to the questions.
4. You will include this explanation and offer to interview someone else in the same post.
5. When others comment asking to be interviewed, you will ask them five questions.

A bar stool, a guitar, a couple of mikes, and a steady gig that paid the mortgage.

2. You, and RFB are raising a very stable marriage, and a smart, funny boy. I know this is VERY hard work. What do you think the secrets are to being such a successful, close knit family?

The week before we married, Ann Landers ran a column with a letter from the husband in a marriage that had lasted more than 50 years. He advised young couples to decide in advance, as he and his wife had, that HE would make all major decisions and SHE would make all minor decisions. Amazingly, he reported, they had never once, not in 55 years, encountered a major decision.

We sorta take that approach.

On MIDC, within the limits of being a ten-year-old (Did I ever mention that his three days in an arcade in Atlantic City yielded up 5,600 tickets, just enough to "purchase" an electric, remote- control fart machine?), he's pretty easy. We nag him to death and love him to death and he rolls his eyes at both.

We're well-aware that adolescence is coming, and RFB knew me at that age. So we're keeping in mind some sage advice we heard years ago from one of our parents' contemporaries: Grandchildren, he said, were your reward for not killing your children.

3. If you were a Super-Hero, whom would you be? (feel free to make one up if there isn't one you want to be)

4. Is Baseball still America's favorite past time? Are there any real baseball heroes in the present day game?

Sadly, it's not. But it's still the greatest game ever invented.

Heroes? Cal.
And Tony Gwynn too.

5. What is, in your opinion, the most important historical event we DIDN"T learn from?
The 20th century's Genocides: the Armenian Genocide, the Holocaust, Stalin, and the rest.
Posted by David in DC at 3:24 PM 6 comments: Links to this post

Losing money in Atlantic City last week was more fun than earning it here this week. The atmosphere here is still kinda toxic. Not directed at me, thank goodness but taxing nonetheless.

I've been productive, have helped folks where I could, and kept below the RADAR as best I could. It seems to be working, as a short-term strategy, anyway.

And, while I don't want to jinx anything, I may have a chance to start a project that would definitely recharge my batteries. I'm to talk about it over cups of caffeinated beverages next Thursday. I get to meet with someone I've known for years in the DC poverty law community. We don't know each other well, but we've always been cordial. I'm excited. More on this, if and as events warrant.

My mother-in-law is visiting this weekend. We like each other, which is a blessing. She and my mom didn't really know one another until they bonded over planning our wedding nearly 17 years ago. Their relationship since then is another blessing.

So it's 4:50 pm on a Friday, and I'm ready to head out the door feeling productive and hopeful --- and I'm looking forward to enjoying my mother-in-law's company and enjoying the delight she takes in Monkeyboy.

Have a good weekend y'all.
Posted by David in DC at 4:42 PM 4 comments: Links to this post

Courtesy of mielikki, of What It's Like to be Me.
Posted by David in DC at 3:36 PM 3 comments: Links to this post

From a grand major league career, through decades of teaching Yankee players how to bunt, broadcasting Yankee games and winning a platinum record for his play-by-play work in Meat Loaf's "Paradise by the Dashboard Light", Scooter brought fun and joy to gazillions.

I'm by no means a Yankees fan but how could you not love Scooter Rizzuto.

After I drop Monkeyboy off at camp (or school), I listen to The Junkies on WJFK during my morning commute. It's a guilty pleasure.

A news anchor this weekend, in Roanoake, VA, had a giggling meltdown.

It's about 2 or 3 minutes into this podcast.

I feel bad for the anchor. I've had a case of inappropriate giggles before. And the underlying story is undoubtedly tragic.

But I still laughed my tuchus off listening. Especially the second time they play the excerpt, analyzing just when he'd lost it.
Posted by David in DC at 10:55 PM 3 comments: Links to this post

Over on the Save Darfur advertisement to the right, you can hear 20 seconds of Ben Harper singing John Lennon's "Beautiful Boy", a song written for Sean Lennon when he was small.

It's a song I really get.

MIDC turned ten in the wee hours of the morning this morning. Ten years ago today, I remember being thrilled with his timing:

He's given us a gazillion things more to be thrilled about since then.

We eat cake and open presents tonight and hit the road tomorrow for our annual visit to Atlantic City. (For my birthday, we go to Chuck E. Cheese's).

We've got ocean swimming, miniature golf, ski-ball, and tickets to see the Atlantic City Surf on the agenda for Wednesday through Sunday. Also boardwalk hot dogs, one of the bestest candy stores in the whole world across from Caesar's, and (if Dad's been winning at blackjack) rides in pushcarts. And an amusement park on the big pier. With bumper cars.

It's 2 days off of work for me and RFB, 2 days of family instead of sports camp for Monkeyboy (with a prospect of Uncle L. driving down to join us for the ballgame), and a no-deadlines atmosphere for 5 full days. Hoorah.

See you when we get back.

Yup, That Just About Sums It Up

Thanks to Moonbeam for passing this along: 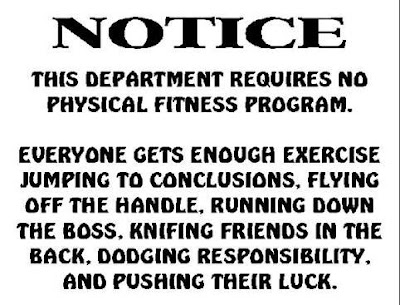 The Get a Wii Campaign Goes Video

Fun With the Youngster

As a kid, I preferred Asimov.

As an adult, I now realize just how much better a writer Heinlein was.

***
Monkeyboy won't cop to a preference, but I notice that his current read-to-himself book is a Heinlein, taken from my shelf.

For those of you that know Heinlien's oeuvre, I've told Monkeyboy he can read any Asimov book at all, and any Heinlien book he can find in the elementary school library.

My copies of his later work, like The Moon is a Harsh Mistress, Stranger in a Strange Land, or Time Enough for Love are on a high shelf. We'll cross that bridge when we come to it. They're great books. But I'd like to hold off until at least teenage years before I start inviting the questions those books would raise.

***
The top 3 CD's for playing in the car on the way to Summer Sports Camp are, as chosen by the passenger: Let It Be, Instant Karma, and Magical Mystery Tour.

***
We argued on Sunday about why he can't have a Wii. (We already have a GameCube.)

The next thing I know, he's found an article on Wiki-How entitled "How to Convince Your Parents to Get a Wii."

I praised his computer skills to the high heavens. So much so that I think I soothed the hurt that came of the realization that he'd already thought of, and tried, all of the suggested strategems.

***
I quoted the English Philospher Michael Jagger to him, about the fact that "You Can't Always Get What You Want".

I think he's caught on that, when I claim to be quoting a philospher, it's usually a rock lyric.

Peace Out!
Posted by David in DC at 5:00 PM 8 comments: Links to this post

We Put the Funk in Dysfunctional

My work environment is especially toxic this week.

I'm keeping my head below the horizon in my ploddingly reliable, competent way. And hoping things get more functional when the dust clears.

I'm appreciated. It helps being someone who "plays well with others."

But the world is arbitrary and my workplace can seem especially so.

I've worked for the Teamsters Union and I've worked for an association of lawyers. My Teamster friends are tough. Still, they're a hell of a lot gentler on their staff.

And depressing, I don't need.