I Love It When My Hero is On the Front Page 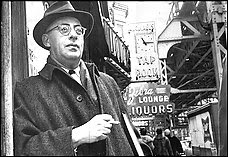 Longtime readers may recall that one of my lifelong role models and heroes is the late community organizer Saul Alinsky.

I last blogged about his work and legacy in the last few paragraphs of this this post.

Today's Washington Post has a front page story on Alinsky and his work.

It turns out Hillary wrote her thesis on him and Barack spent three years working for the organization that advances Alinsky's legacy.

Chicago organizer Gregory Galluzzo, Obama's former supervisor, who likes to describe himself as Alinsky's St. Paul, believes that Obama's exposure to the organizer's liturgy taught him that wisdom can emerge from the grass roots. "Hillary," he said, "leans toward the elites."

But Galluzzo believes that both candidates were influenced by their encounters with Alinsky and his methods. "By either one of them being in office," he said, "we're going to have a government that's more responsive to the ordinary people."

Interesting. I've read much about Jane Addams, but not about more recent activists/figures out of Chicago.

I will reserve comment. I am a non-red and non-blue, wingless political cast away. I am in the 30-40 straight, white, middle class, working slobs catagory--the government (D or R) hates me.

I can see tee-shirts in the making here..or buttons of some kind. Also, with the countdown days hootywhomper for the President Bushter, someone could have a fun time with a tee-shirt there too. People walking around with there tops counting away. Hooters galore.