It's Superhero Appreciation Day over at e.clec.tic spaghetti. And on the many blogs who use Taradays for inspiration.

He spoke only in rhyme.

His alter ego was a lovable shoeshine boy.

He was voiced by the late, great Wally Cox. 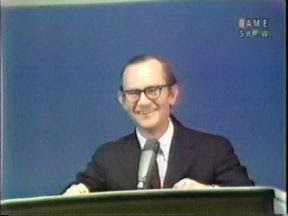 (You may remember Wally from the upper left hand box on the original Hollywood Squares game show.)
When he needed extra power, he popped a power pill from a special ring he wore.

His one true love was that hottie Sweet Polly Purebred

Look up in the air, it's a bird, it's a plane, it's a frog!
Not bird, nor plane nor even frog. Just little old me: 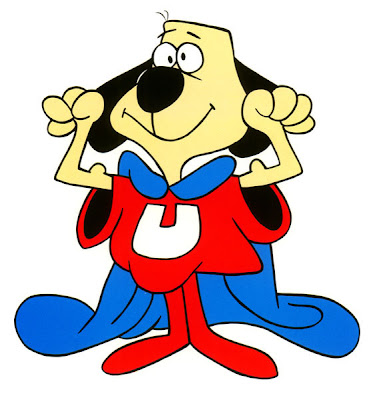 I once played in a youth group band: "The Misharmonic Purple Scum Band." We only played about three songs. Our big number was (The Theme from) Underdog. To this day I can sing both verses and the chorus.

In putting together this post, I ran across this great Hollywood Squares site.

It says that, upon opening the show of February 16, 1973, the day after Wally's death, Peter Marshall said:
Dear Lord, have no fear, Underdog is there!
Posted by David in DC at 10:56 AM

I saw the preview for the Underdog movie this week, and I'm not sure who the movie is for. I know who underdog is, but I'm a little young for it it don't really remember the show. The kids won't know who Underdog is, and I can't see the theater filled up with people a bit older than me watching a movie about a flying dog either.

I always did root for Underdog. . .

Underdog was way cooler than Hong Kong Phooey...for some reason those two characters are always linked together for me. Hong Kong did have a better theme song though.

Yay, Underdog! What a superhero! Great choice, he could totally save the world!

My daughter loves Underdog. They had it syndicated on some channel when she was younger and she got really into it. I wish it was still on.

Back to what laughingatthe said up there, I too recently saw the promo for the live-action, CGI-heavy "Underdog" movie, and just about barfed. Seeing these pictures of the real Underdog just about breaks my heart, knowing as I do that here's a wonderful childhood memory that's about to be destroyed.

I don't guess I'm going to cry too much about Underdog and the new movie. It's been too long, and I don't really remember it, so I probably won't even know what parts they ruin.

But when Land of the Lost comes out, I'm going to go postal.

Will Ferrell must die.

I recall seeing this cartoon as a kid but now you can't find it anywhere.. I hope they bring it out on DVD.. Mr.Giggles will really appreciate that...

The funny thing is, I had NO IDEA there was an Underdog movie coming out until Laughing pointed it out in the first comment.

Monkeyboy and I have since watched the trailer at a Disney website and we'll probably see the movie. Go figure.

l.b. I used to like the poetry too. I guess it's more appropriately called doggerel.

Tara: And the world could use some saving!

Aunty: Be of good cheer. Maybe the movie will exceed your expectations.

Laughing: The Ferrell take on Bewitched didn't suck. Maybe Land of the Lost will be OK, too.

But just in case, let me know where you're seeing Land of the Lost when it comes out. I like to try to avoid postal-type carnage when I can.

Babybull:The first few seasons of Bullwinkle seasons are on DVD. I can't get enough of them.