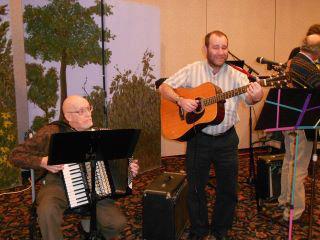 Rock Hard Bagels is a fairly unusual rock band.  Six middle-aged guitar, bass, mandolin and occasional tambourine players, a twenty-something keyboardist who makes what we play sound approximately like music and, until now, an 80-something accordionist.

Like the Ramones (Joey Ramone, Dee-Dee Ramone, etc), despite being unrelated, we all took Bagel names.  I'm Sesame Bagel. The bass player, being a bass player, chose Bialy.

It seemed to me that Don, the accordion player, was a natural to be called "Poppy".  He was having none of it.  He chose "Sun-dried Tomato" Bagel. We enlisted the help of his daughter and eventually convinced him that "Sun-dried Tomato" wasn't a real bagel. So he became Cinnamon-Raisin Bagel.

For the last year-and-a-half, he and I, and a rotating cast of others, played a weekly SCRABBLE game (at least on weekends when we had no gig coming up and therefore no practice.)  He'd been given a terminal cancer diagnosis, and about four-six months to live. Quietly, but with a twinkle in his eye, he defied the actuarial tables for better than a year.

He'd had careers as an actuary and, in "retirement," as a law student and then full-time volunteer poverty lawyer, so wry satisfaction at beating the grim reaper's odds and quiet defiance came naturally.

We talked about politics, religion, philosphy, trivia, word origins and a million other topics. He could be sarcastic, but never caustic. He was a skeptic, but never a cynic. He was one of the best people I've ever met, and I'll miss him dreadfully.

But don't just take it from me.  Here's a link to his obituary and, of more significance, the article that was written about him a couple of years ago when he was named a Living Legend of Alexandria Virginia:. http://www.alexandrianews.org/2012/12/don-mela-dies-at-89/

This was shortly before he was diagnosed with cancer.  I was honored sit with Don and his family that night, and every time since.  As we left, he grinned and told me "It's gratifying to hear people say such nice things about you before you're dead." That was vintage Don.  It combined genuine appreciation with hard-won wisdom about human nature.