Glenn Beck is a Dolt

He thinks he’s a conservative opinion-maker, like his betters (Bill Buckley, Bill Bennett, even Rush Limbaugh.) He’s not. He’s a fatally flawed advocate who’s made the supreme error of believing his own press notices.

Buckley always maintained that, as much as National Review would serve as the standard-bearer for intelligent conservatism and debunking the liberals he saw in ascendency, it was also intended to “drain the fever swamps of the right.” He was nearly alone among conservatives in confronting the John Birch Society. By sheer force of will and an unparalleled gift for sophisticated polemic, Buckley managed to turn the Birchers into pariahs, marginalized and consigned to the far-fringe.

Later in his career, he wrote a scholarly article, taking up nearly half his magazine, analyzing the question “Is Pat Buchanan an anti-semite?” It was a question conservatives needed to consider, but only Buckley had the courage to explore the topic in a serious way. His final answer was a bit more nuanced than some would have liked, but he found his way there with a scrupulous regard for facts, and how far the facts could take you.

To this day, Bennett, with whom I disagree, holds a warm spot in my heart for his dead-on candor when asked what he wouldn’t miss about being drug czar. “I won’t ever have to appear before Charlie Rangel again. The man’s a gasbag.” Truer words have rarely been spoken.

Except maybe for Bob Dole’s observation that the most dangerous territory on Capitol Hill was any ground between Chuck Schumer and a news camera.

The case of Limbaugh is perhaps the most apropos. Limbaugh knows, and he makes clear that he knows, that his principal job is as an entertainer. He started his career as an AM radio jock, playin’ the hits and makin’ your ride home more fun. I don’t doubt that he believes most of what he says, but it’s hard to listen to him for long without acknowledging his talent for humor and his infectious high-spiritedness. The man’s an entertainer wise enough not to be duped into believing his own publicity.

The dittoheads are another story. Mostly, they haven’t figured out that Limbaugh is doing schtick. I’m glad most of them come to any battle of wits unarmed.

An American who purports to be a political commentator, but says he had no idea what significance August 28th holds in America’s patriotic history, is not a political commentator to be treated with any seriousness. An American who discounts that significance when he hears of it, choosing instead to hijack Dr. King's words, merits contempt. Beck's pretense that his Take Back America hootenanny had something to do with civil rights was loathesome.

No one need boycott Beck, his employers or his advertisers. I’m confident he’ll eventually fall of his own weight. In the marketplace of ideas, nothing kills a bad idea better than good advertising. Sometimes it takes a while, but over the long haul, something approximating reason eventually prevails.

Here is a set of Beck quotes, with citations. His own words damn him far more than mine ever could.

"I am not saying that Barack Obama is a fascist. I'm not saying the Democrats are fascists. I'm saying the government under Bush and under Obama and under -- under all of the presidents that we've seen, or at least most of the presidents that we've seen for quite some time, are slowly but surely moving us away from our republic and into a system of fascism." [Fox News' Glenn Beck, 4/1/09]

About Obama’s health care initiatives, Beck told a caller: "Let me tell you something, the end game ... for Congress and this president -- and I don't know how many members of Congress even realize the game that they are either being used in or a pawn in. But believe me, they'll take ... the universal health care coverage over what ... skin they do have in it. They're going to come out -- this system is going to come out the other side dictatorial -- it is going to come out a fascist state." [Premiere Radio Network's The Glenn Beck Program, 7/27/09]

First, the sun. The sun represents the bright tomorrow. Right here, underneath the boy, here is the sun. Show me the boy. This is the youth. The next one is the youth here, leading the way. Notice he is ahead of the horses. He's leading the way into the bright future of tomorrow.Now, this man standing on a chariot, the wheel. The wheel is always representative of industry in any of these progressive pictures or paintings or artwork. So you've got the wheel. Now, let's go to the horses, please. He is standing on a chariot. You've got the industry and the engines of industry, but who's in the back here?

Let's show you his hand. This man's strong hand is holding on to the reins tightly here, holding back the engines of industry being led into the bright future of tomorrow by a young boy. Who is this? Who is this?

This is the strong leader taking that -- using that industry and those machines to lead us into the bright future led by our children. Gee, who's having indoctrination next week? Oh, yeah, that's right. The president. Completely unrelated.

This represents, at the time this was made, Mussolini. This was Mussolini. By the way, the artist that made this -- his son, ironically and tragically died fighting the army of Mussolini years after this was made. This still is up in Rockefeller Plaza.

So you have the hammer and the sickle. You have the artwork to Mussolini there, here in New York at Rockefeller Plaza. [Fox News' Glenn Beck, 9/2/09]

Discussing Obama's "civilian national security force," Beck said, "I'm finding this -- this is the hardest part to connect to, because this is -- I mean, look, you know, David [Bellavia, former Army staff sergeant], what you just said is, you said, "I'm not comparing" -- but you are. I mean, this is what Hitler did with the SS. He had his own people. He had the brownshirts and then the SS. This is what Saddam Hussein -- so -- but you are comparing that. And I -- I mean, I think America would have a really hard time getting their arms around that." [Fox News' Glenn Beck, 8/27/09]

No Prayer in Schools? Nonsense.

Some charge that G-d's been thrown out of the schools. They must worship an awfully weak god.

No one can banish G-d from anywhere, let alone a school filled with innocent children, made in G-d's own image.

As for the lesser charge that prayer's been thrown out of the schools, I promise:

A Prayer for Reconciliation

Whether we call our mutual grandfather Ibrahim or Abraham, we're all cousins. We're all taught to seek justice, love mercy, and walk humbly with our G-d.

We must condemn our blasphemous fanatics. We must nurture and heed those in our midst who truly sanctify the name of the Eternal One with prophetic calls for reconciliation.

Blessed are the peacemakers.

And let those who will, say:
Posted by David in DC at 2:11 PM 2 comments: Links to this post

As many of you know, I post funny Halloween, Thinksgiving, and Christmas pictures in a blatant attempt to pimp up my hit count. It works. In January through September, my daily counts are always measurable with two digits

As a welcome side benefit, you get some extra giggles. It's the classic win-win situation.

So here are some new funny halloween pictures. 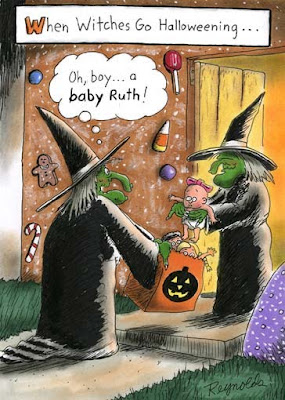 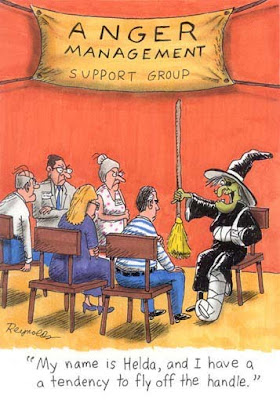 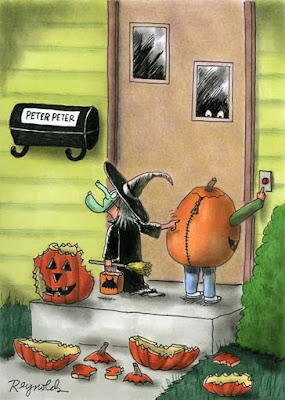 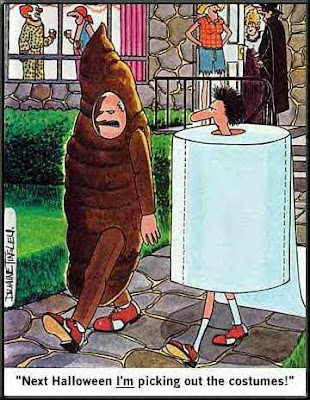 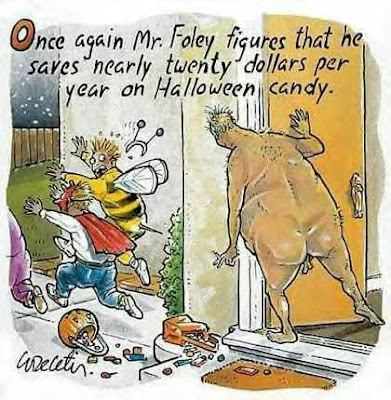 Joel Burns is My Newest Hero

To see what happens when you have an engineer in your household who's got too much time on his hands, click here.
Posted by David in DC at 6:44 AM 3 comments: Links to this post

Here's an unusual approach to fundraising: 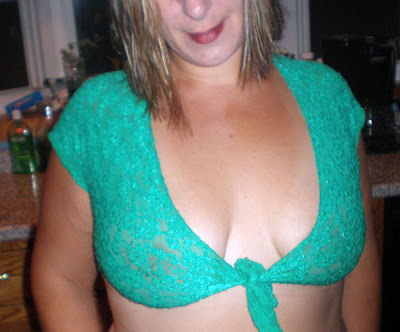 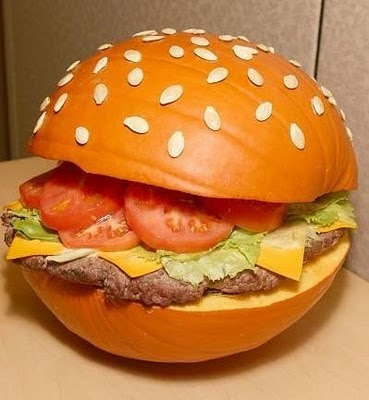 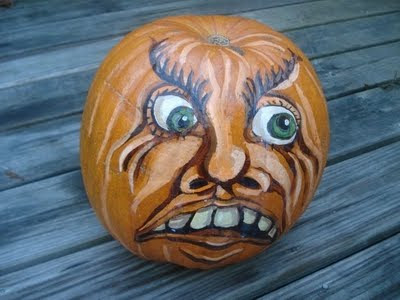 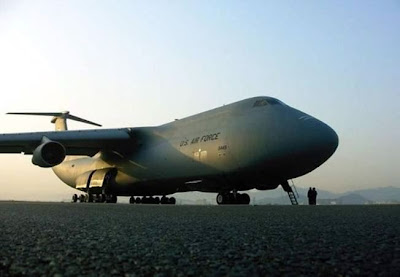 While the C-5 was turning over its engines, a female crewman gave the G.I.s on board the usual information regarding seat belts, emergency exits, etc.
Finally, she said, "Now sit back and enjoy your trip while your captain, Judith Campbell, and crew take you safely to Afghanistan."
An old MSgt. sitting in the eighth row thought to himself, "Did I hear her right? Is the captain a woman?"
When the attendant came by, he asked, "Did I understand you right? Is the captain a woman?"
"Yes," said the attendant, "in fact, this entire crew is female." 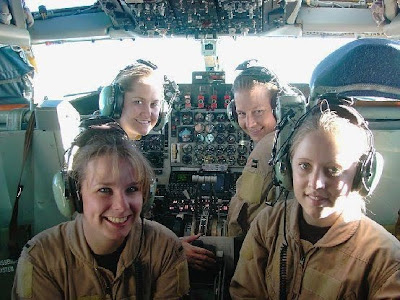 "My God," he said, "I wish I had two double scotch and sodas. I don't know what to think with only women up there in the cockpit."
"That's another thing, Sergeant," said the crew member, "we no longer call it the cockpit. It's the box office."
Posted by David in DC at 11:24 AM 3 comments: Links to this post