From yesterday's WaPo: Whose Israel Shall it Be?

Virg Bernero Is My New Hero

With thanks to my cousin Debbie, in Buffalo, for this gem:

A man and his wife were having an argument about who should brew the coffee each morning.

The wife said, 'You should do it because you get up first, and then we don't have to wait as long to get our coffee.

The husband said, 'You are in charge of cooking around here and you should do it, because that is your job, and I can just wait for my coffee.'

Wife replies, 'No, you should do it, and besides, it is in the Bible that the man should do the coffee.'

Husband replies, 'I can't believe that, show me.'

So she fetched the Bible, and opened the New Testament and showed him at the top of several pages, that it indeed says: 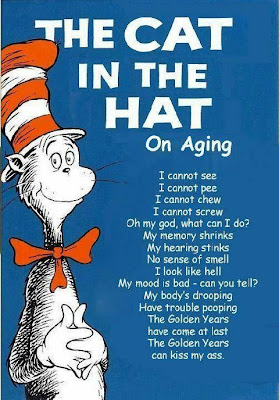 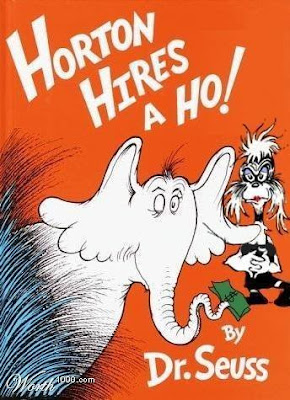 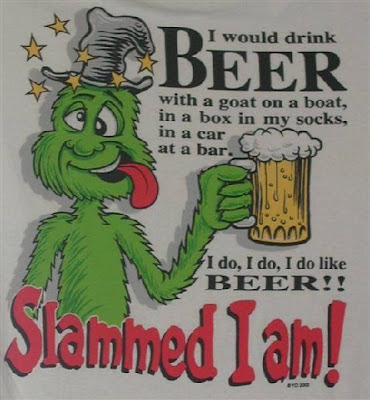 As always, thanks to Michel for these.
Posted by David in DC at 5:40 PM 2 comments: Links to this post

Who Moved My Shoulder?

I was coming home from a fairly useful pshrink appointment. The doc stayed awake, my tenuous grasp on reality was reinforced, and I had prescriptions to top of my bottles of Happy Pills.

Driving eastbound on I-66, at the height of rush hour, I encountered a little problem.

Just inside the Beltway, there's a stretch of superhighway with a shoulder on the right that stops being a shoulder from 3:30 until 7:00 pm.

For that benighted time period, it becomes an express lane for buses and vans serving the West Falls Church Metro stop. It's a very bad place to hear your tire start to fail.

The stretch of highway probably only goes on for about a mile and a half. It leads to a flyover with no shoulder. That's about 2 tenths of a mile. That leads to a regular superhighway, with a regular, blessedly sufficient shoulder.

As you may have guessed by now, I was just approaching this abomination of civil engineering, at about 60 mph, when I heard a little rumble. I felt a little shimmy. I looked to my right and realized where I was.

I hit my emergency flashers, slowed to 30, and started to sweat. I may have uttered a barnyard epithet. I didn't really contemplate my doom, but I definitely regretted passing up that extra slice of pecan pie at lunch.

Adding the stretch of road with its procession of suddenly-lethal buses and vans to the subsequent flyover ramp, I now calculate the distance to be about 1.7 miles.

It took me roughly three weeks to traverse. Sweating out roughly one-third of the hourly liquid spillover at Niagara Falls --- as measured by the nonpartisan, bilateral U.S.-Canadian Riparian Cooperation Commission.

I have power windows, so I hit the button to roll them down at the start of my escapade, to smell rubber.

It wasn't too bad when I started. I was contemplating wrecked rims by the time I could finally pull off.

I called the police and I called AAA.

When the AAA guy got there, he scolded me for being on my cell phone while he called me trying to hone in on my location. The mile marker (down to a tenth of a mile) I'd given the dispatcher was clearly too general.

The police sent a guy from V-DOT (Virginia Department of Transportation). He got out of his pick-up with the flashing lights and I finally found out where the father in the trio of hillbillies in Deliverance had moved on to. He had three teeth, a weeks growth of beard, a ciggie dangling from his mouth, and shouted to the AAA guy: "How many people did this guy call, anyway?"

I replied "The cops and Triple-A, which one shouldn't I have called?"

Sotto voce, the AAA guy, who looked like a cross between Willem Defoe and John Riggins, said "You did right, you call both and take whoever comes first."

He put my donut on my wheel, assured me I'd missed effing up my rim by a matter of moments, and went to his car for some paperwork.

While he was away, Grampa Hillbilly said "Your flashers have been on an awful long time, maybe you ought to start her up after he comes back."

This guy, too, was beginning to grow on me.

Defoe/Riggins comes back, gives me some paperwork, and warns me that I can't drive faster than 50 mph or longer than 50 miles on the donut.

Grampa makes his start her up suggestion again.

Luckily, Triple-A fixes that too.

Now I had three instructions:

Stay under 50 mph
Don't drive more than 50 miles
Drive at least 15 minutes to recharge before stopping.

I shook both men's hands, thanked them, and drove toward Sears, reflecting on my good luck.

I got to Sears before the fifteen minutes were up.

Going through a McDonald's drive-through keeps the engine running.

(A death-defying daredevil like myself scoffs heartily at cholesterol.)

$600.00 later, I'd done my part for President Obama's goal of stimulating the economy and had four new Goodyear tires, and an alignment.

If anyone wants to start a movement to demand that shoulders be shoulders 24 hours/day, 7 days/week, count me in.
Posted by David in DC at 2:44 PM 3 comments: Links to this post

Hell, back in 1990 the government seized the Mustang Ranch brothel in Nevada for tax evasion.

As required by law, they tried to run it profitably.

Now we're supposed to trust the economy of our country, our banking system and our auto industry to nit-wits who couldn't make money running a whorehouse and selling whiskey?!

Michel sends me the funniest stuff.
Posted by David in DC at 4:25 PM No comments: Links to this post

The Third House of Congress

A conference committee is often called "the third house of Congress"

Whether we get a clean stimulus package or a Christmas tree festooned with ornaments of pork depends on a committee of notables.

They'll hammer out differences between the House and Senate bills. They're also free to delete stuff both houses of Congress approved and insert stuff neither house approved. Or even considered.

Some stuff that's being stuffed in, like fair treatment for Filipinos who fought on America's side in WWII, isn't going to do much to stimulate the economy. It's mostly about America finally acting like America ought. Then again, a few bucks in the pockets of elderly Filipinos and Filipino-Americans might goose prune juice sales in Hawaii a little. I'm just sayin'.

Other stuff being stuffed in is defensible. The President defended one yesterday.

Why wouldn't you require a move toward alternative fuels in the clauses covering the purchase of government vehicles? The stimulus part is buying the damn cars. If, at the same time, he can move forward on something he and McCain agreed on last fall --- weaning ourselves from dependence on energy bought from folks who don't like us very much --- that's a good thing.

Other stuff being stuffed in is utterly indefensible; the conference committee should wield a scalpel, not a ladle.

Bob Dylan sang to an earlier generation of legislators:

Come Senators, Congressmen please heed the call
Don't stand in the doorway, don't block up the hall
For he who gets hurt will be he who has stalled
There's a battle outside and it's raging
It'll soon shake your windows and rattle your walls
For the times, they are a changing

It might be a good idea to have that song playing while they meet.

Maybe on a loop with the Springsteen/Pete Seeger performance of Woody Guthrie's "This Land is Your Land" at the Lincoln Memorial on Inauguration Weekend.

All six verses.
Posted by David in DC at 2:30 PM 3 comments: Links to this post