When does Extreme Tracker say you're breaking a hundred hits per day?

A month before Halloween. People looking for "funny pumpkin pictures".

And, if history repeats, in a month I'll be breaking 200 per day, with people looking for "funny turkey pictures".

I hope a few stick around to read some other stuff too.

On the other hand, this former class clown does take some pleasure in the fact that the single most searched word leading to his blog, more than 10% of all searches leading here, day in and day out, is "funny".

I've got three for you this time, all courtesy of Home Box Office last night:

If you're squeamish about that kind of thing, this is not the movie for you.

Afterwards, there are two more wrenching plot twists before the MacGuffin comes into view. This is well-written stuff, directed with precision.

It boasts an amazing --- and amazingly talented --- cast:

Alicia Keys. That's one brave human. Imagine having the confidence to make your feature movie debut in the company of the above.

Back to Piven for a minute. I also watched a couple of Entourage episodes last night, to get caught up while I wasn't sleeping anyway. Jeremy Piven is spectacular.

If you can get past the show's casual misogyny, he's in his fifth season of giving a master class in inhabiting a character.

If you can't get past it, rent Keeping Up With the Steins. He plays a smaller, more likeable version of the same character there.

Alan Ball has gotten better since dreaming up and writing Six Feet Under for HBO, which I would have scarcely thought possible.

William Sanderson (from Newhart: "I'm Larry, this is my brother Darryl and this is my other brother Darryl") gets to play it straight this time. I miss Deadwood terribly, and he was a brilliant buffoon on that late, lamented series, but it's nice to see him play a normal guy for once, a small town sheriff who probably knows more than he lets on.

And the guy playing a vampire named Bill is a revelation. I've never seen Stephen Moyer before. I'm an instant fan.

I didn't start out meaning to write a promo for HBO, but there you have it.

Sleeping's overrated anyway
Posted by David in DC at 9:33 AM 13 comments:

Sarah Silverman on "The Great Schlep"

McCain and the Queen of Hearts

I've always thought John McCain had an unseemly habit of transforming factual and policy disagreements into accusations of corruption or treachery.

But I never really expected ur-conservative George Will to be making my point for me.

A couple of times a year, MiDC's youth choir sings at the monthly Friday night Sabbath services at Greenspring Village, a Northern Virginia retirement community. The residents love having the kids (and Miss Carol) lead the prayers and songs and the kids love the attention showered on them afterwards by grandparent-type people who maybe don't get enough time with their own grandkids.

For the rest of this post to make sense, you need to know that one of my guilty pleasures is listening to the Mike O'Meara show on my weekday commute home. It's usually sophomoric, more-than-occasionally vulgar, and almost always in questionable taste. It's also often hilarious.

My ears perked up today when Mike and his cronies started interviewing the Hunks of Greenspring Village. It seems that last year, the women of Greenspring posed for a cheesecake calendar that wound up raising more than $40,000 for the Greenspring Benevolent Care Fund. The Fund assists residents who have exhausted their assets to continue living at Greenspring, a pretty wonderful community of 2000+ seniors who enjoy a wide range of first class services. The ladies challenged the men to do the same for 2009. The men are aiming for $50,000.

And here's a link to the pics Mike had posted on his show's website after the interview.

Moonbeam Gets Invited to the Most Interesting Soirees

She has my thanks for forwarding this to me: 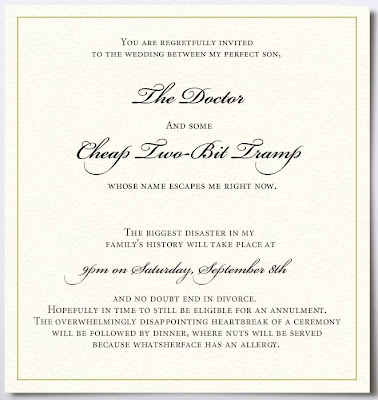 A while back, I put up a profile on a business and career networking site. I didn't figure it would help much, but I figured it couldn't hurt.

Yesterday, I got an invitation from someone whose name I did not recognize, inviting me to link. Every other time I've gotten such an invitation, it's been from a friend or colleague who was also signed up on the site, and it's always been a pleasure to think of someone I hadn't talked with in a while but who wanted to stay in touch.

I figured this generic "I want to link with you" invitation was some form of spam.

But, on a lark, instead of declining, I sent back a message saying

Do we know one another?

What came back knocked me over.

About two-and-a-half years ago, I got a call from a former colleague I'd always liked. She was looking to refer a friend to someone at the D.C. Bar (where I work) who could advise him on applying to be admitted to the Bar with a blemish on his record.

I told her my job had nothing to do with that kind of thing, but that I personally had some experience with the matter and if her friend wanted to call me, I'd be happy to share my experiences with him, as someone who'd gone through the process.

(My blemishes, as long-time readers know, include a voluntary 2-week psychiatric hospitalization in my early 20's.)

(Aside: Never agree to being locked up on a psych ward on the Friday before a Monday holiday. They just warehouse you 'til Tuesday.)

He subsequently called, and I remember him as being an easy conversation and a nice guy.

I told him the extra hoops I'd had to jump through, what a pain they were, warned him that everything takes longer than it should, and was reassuring about the likely final outcome in his particular set of circumstances.

I then promptly forgot about the whole thing.

As Paul Harvey might say, "Here's the rest of the story":

Sharing about your experience prepared me for the worst, which is pretty much what it was.

So thank you so much for talking to me.

As for [the networking site], I was told I should do this, but I took the easy route by letting it into my email and just sending one invitation to lots of people, without personal, notes.

We must have communicated via email for it to pick you up.

Thanks again, David. I really really appreciate all your input.

Moral: Be nice. You never know which small act of kindness will be the one that makes all the difference for someone.
Posted by David in DC at 11:25 AM 4 comments:

On Democracy and Other Stuff

My friend Michel just sent me a couple of nuggets of wisdom.

'Those who are too smart to engage in politics are punished by being governed by those who are dumber...' -Plato

MiDC has found a great, fun pirate website. It's full of games and puzzles, and can be played for free. (You can also play a hyped-up version for a subscription. None of that for the iDC household.)

He asked me to post a widget to show off his piratey skills, ranks, and trophies.

Also, if your inner child, or your real live child, joins the site through the cool widget above, you, he or she will start out with extra "pieces of eight" (that's the coin of the Puzzle Pirates realm) and MiDC gets some extra pieces of eight for the referral.

Avast, matey. No need to remain a landlubber with this great passport to the puzzles and mysteries of the Seven Seas.

We're thinking about doing a fundraiser at my shul's religious school. Here's a description:

XXXXXX is very interested in working with us in a fundraiser. Their coffee is fair trade and organic etc.

They buy the whole beans and roast and grind them right in their store. They said they would sell the coffee to us at whole sale for about $X.00 a pound including the packaging into a pound bag. They would put Beth El Blend or whatever other name we might decide on, on the label. We could print out stickers with the 150 year logo printed on them and just stick it on the bag.

They would make a caffeinated blend and a decaf one. They suggested that we come by to taste and choose the coffee(s) we would want to use and to discuss all the particulars. We could make up a flyer to advertise the coffee and perhaps sell it for X - Y dollars a bag. We would then make Z - A dollars per sale. We could pre-sell it and then deliver it, or have some at the ready and sell it right then and there.

They would also be willing for us to do a tasting like during religious school hours.

*I'm a member of the band, a group of middle-aged, paunchy, balding rock star wannabes who play at synagogue events a couple of times each year.

Now it's your turn.

Playtah once won a brick this way.
Posted by David in DC at 5:46 PM 8 comments:

One great thing about insomnia is late night movies. I watched one the other night that was just awesome. A real slice of life, capturing a time and a place perfectly.

Anthony Michael Hall as a super jock high school athlete. Robert Downey, Jr. as his comic foil and the movie's sarcastic Greek chorus. A young Uma Thurman, demonstrating in a million small ways why she was about to become one of the leading film actresses of her generation.

It's full of character actors and cameos (Jim McMahon, Howard Cosell), it's got a decent soundtrack, it's light and it's fun.

Did I mention Uma Thurman?

I've written about Saul Alinsky, and the Industrial Areas Foundation, and efforts to organize for progressive change in Northern Virginia before.

Man am I pissed to hear the Republican attack machine trying to turn "community organizer" into a dirty word.

So what's a community organizer? This is.
Posted by David in DC at 10:29 PM 4 comments:

Words Can't Improve On This 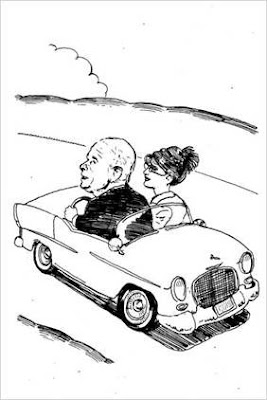 With thanks to my friend Michel for passing it along.
Posted by David in DC at 9:36 AM 8 comments:

2) If the employment status of your ex-brother-in-law as an Alaska State Trooper --- while he was in the midst of an ugly custody and divorce battle with your sister --- was not an appropriate case for you to recuse yourself, what on G-d's green earth would be an appropriate case?
Posted by David in DC at 1:23 PM 2 comments: